After the debacle with Friday night’s introduction to Pasadena Art Night, I was a bit nervous about trying out Saturday’s activities.  But again, being a Libra, I had to push forward, stay optimistic and hope that the next event would be better.  Besides, this particular event involved food so how could it be bad?

So I took the Metro Gold Li

ne over to Lake (where I realized I had to buy a transfer ticket to ride the Pasadena Arts bus) and hopped on the Arts bus down to the South Lake Farmers’ Market area to partake in the Art of Food event.  There were no mishaps with the buses this time so things were working out.  The Art of Food just might redeem Art Weekend.

So when I arrived at the event, a young woman approached me, asking me how I had learned of today’s event.  I told them “Pasadena Weekly.”  They then sent me over to their booth where I could fill out a quick survey and get a free reusable grocery bag.  (YAY for free stuff).

There were food booths galore, a demo area (there was a bartender teaching the art of cocktail making–awesome), a live band performance and a beer and wine garden.  Each booth represented a local business in the South Lake area.  I decided I would avoid the chain restaurants and check out the local Mom & Pop style establishments.

Most booths were giving out sample platters for $1 to $4, depending on what you wanted to try.  There were also free samples, stickers, raffle prizes, and menus.  Some booths had really long lines–like the fondue place.

I decided I would check out a place that I had just read about in this week’s Pasadena Weekly, The Real Food Daily (Organic Vegan Cuisine).  Since my friends and I really enjoyed Green Earth Vegan Cuisine the other night, I thought it would be nice to compare and contrast.  At the Green Earth Vegan Cuisine booth, they had samples of a Caesar Salad and Wrap sandwich for $2.00.  To be honest, it wasn’t bad.  It tasted like there was meat in there–chciken and bacon, I believe–even though it was completely vegan.  But when you compare it to Green Earth, Green Earth is more of a fancy, sit-down restaurant where as Real Food Daily reminds me of diner of deli food–kind of like the veg

an version of Togos (which was at the event as well).  I would definitely check out their restaurant and other items on their menu.

I continued to walk around and check out the different booths, picking up free samples along the way.  But it was Float Pasadena that got my attention and caused me to stop.  There were selling “Dad’s” root beer, root beer floats and boxed water.  I was curious about the boxed water so I had to inquire about something I had never seen or heard of before.  It literally was a box of water, kind of like the box that you would purchase milk it.  They said it was better for the environment.  I just thought it was really cool and I was stopped by many people, asking about mybox of water.  They also had samples of their caramel popcorn (in a recycled bag) and their sandwiches.  I tried the “Hungry Vegetarian” sandwich sample and it was amazing–a flavorful treat for my taste bu 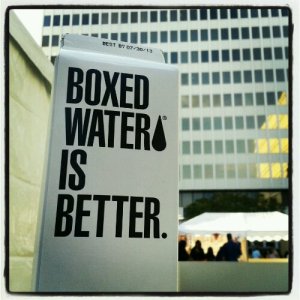 ds.  I took their menu–and they gave me a sticker (yes, I am a big kid).  This is definitely a place I want to check out.

Now I would like to clarify that I am not in-fact a vegetarian.  I am a Midwestern born and bred girl from Detroit who loves meat.  I have many friends who are vegetarians or who have food allergies so it is also a good idea to find places where everyone can enjoy the food.