I have been sitting here, trying to find the words to say goodbye to a man who changed my life.  When I met him, I was just a young college freshman still trying to figure out what I wanted to do with my life.  He was older, with so many years of success and experience that I could learn from.  I still remember the night I met him.  I don’t know where I got the courage but I approached him in one of the main theaters on campus where he was giving a lecture.  I wasn’t the only person who was moved by what he had to say.  So as a group, we convinced him to come back to the lobby of one of the dorms and continue a conversation that would span into the wee hours of the morning.  This man was Ray Bradbury.

I remember my first real introduction  to Ray Bradbury was in high school with Fahrenheit 451.  Though many of my classmates moaned about having to read such a tale, I fell in love with it.  I fell in love with the writing style.  There was something poetic about it.  I found it inspiring.  So when I found out that Mr. Bradbury was giving a lecture at USC, I knew that this was an opportunity that I couldn’t miss. 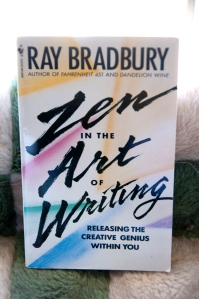 I don’t remember exactly what he said but I remember how I felt.  It was as if he had opened my eyes to a new way of thinking.  I was never one to just walk up to a celebrity before but I felt I had to talk to him.  I was in this weird limbo place in my life where I knew I loved writing but I wasn’t sure what to do with that passion.  I remember he told me that I needed to stop worrying about whether or not I was any good at it or if anyone would like what I had to say.  He asked me, “Do you feel good when you write?  Does it make you happy?”  Yes.  “Then just do it.  Do what you want to do for you and don’t worry about anyone else.”  Then he reached down into this leather satchel and pulled out one of his books.  He handed it to me and said, “This will help.”  The book he gave me was Zen in the Art of Writing, one of my most treasured possessions.

A year later, he came back to USC for a book signing.  I remember telling him that thanks to him, I changed my major to Creative Writing.  He smiled and gave me a hug.  Then he told me, “Don’t ever stop doing what you want to do.” 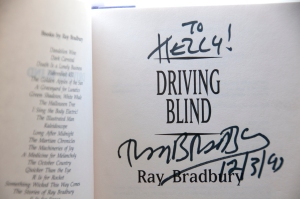 All these years later and I still have the book he gave me (and the book he signed for me).  But I think I lost my way for a while.  It’s hard to keep up with the writing when you are going through tough times and you have to focus on financial matters.  You have to take a job that will pay the bills and push your dreams to the side.  But over the past year or so, I have been trying to get back to the dreams.  So when I heard the news of his passing on Tuesday, I dug out my copy of Zen in the Art of Writing and transported myself back in time.  This book is just as inspiring to me now as it was back then.  For a while, I got away from doing what I wanted to do.  But in some strange way, I feel like the Universe is telling me that now is the time for me to go back to “doing.”

And I think that even though he is gone, Mr. Bradbury still gives the best advice.

Doing Is Being
Doing Is Being.
To have done’s not enough;
To stuff yourself with doing–that’s the game.
To name yourself each hour by what’s done,
To tabulate your time at sunset’s gun
And find yourself in acts
You could not know before the facts
You wooed from secret self, which much needs wooing,
So doing brings it out,
Kills doubt by simply jumping, rushing, running
Forth to be
The new-discovered me.
To not do is to die,
Or lie about and lie about the things
You just might do some day.
Away with that!
Tomorrow empty stays
If no man plays it into being
With his motioned way of seeing.
Let your body lead your mind–
Blood the guide dog to the blind;
So then practice and rehearse
To find heart-soul’s universe,
Knowing that by moving/seeing
Proves for all time: Doing’s being!
~Ray Bradbury, Zen in the Art of Writing