This weekend felt like my own personal birthday gift from the heavens–they gave me rain!  It finally cooled down and felt like October.  It would have been better to see the leaves change color but I will take what I can get. 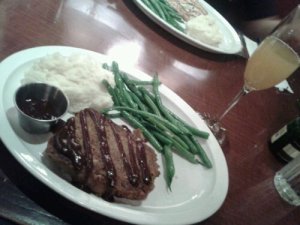 For my birthday, I decided to hang out with my friend Ida in Old Town Pasadena.  I had a craving for my staple comfort food–mashed potatoes and gravy.  So I searched Yelp for a diner in Old Town Pasadena.  The search mentioned Russell’s on Fair Oaks.  The reviews described it as being a diner type establishment that was always crowded.  So I was imagining a 50’s style diner or even something like Denny’s but Russel’s was neither.  Russel’s felt like a very fancy restaurant, a perfect place for a first date.  Yes, there were booths but they were more elegant than a typical diner.  There were lamps instead of cheesy light fixtures.  There were classic paintings by Masters like Picasso and Van Gogh covering the walls; it almost felt like an art gallery.  There was classic music playing and a fancy looking menu.  However the food was similar to a diner menu, but again a more upscale diner.

We both ordered a Bellini, even though it didn’t really seem to go with my meatloaf and mashed potatoes dinner but I liked it nonetheless.  Ida ordered the Chicken Breast dinner.  We were both pleased with our meals and I do have to say, the mashed potatoes were amazing.  But we both agreed that the Yelp reviews did not do this place justice.  It wasn’t what we expected . . . it was better.

After dinner, we decided to check out the Old Town Haunt on Raymond and Colorado.  I have done the Knott’s Scary Farms and the Universal Halloween Horror Nights.  I am the kind of person who laughs through a Haunted House.  I am usually laughing at the girly girls who are screaming.  It takes a lot to scare me.  But I read a lot of good reviews for the Old Town Haunt and the actual Haunted History of the building where the haunt occurs.

When we first arrived and got into line, we were excited about possibly being scared.  Unfortunately, my excitement turned sour when the group of inconsiderate 20-something a**holes started smoking in line, breaking a whole bunch of city ordinances.  They didn’t even care when I was vocal about my allergy to smoke and started coughing.  In fact, they all decided to light up so I had to excuse myself from the line.  Being the good friend that she is, Ida braved standing near the IAs.

Personally, I will never understand the selfishness of smokers.  There are so many people in a small area waiting to go into the haunt, many were children.  If you want to smoke and kill yourself, that is your prerogative but why force the rest of us to choke on your second-hand smoke just because you have a sad, pathetic addiction that will lead you to an early grave.  I like my life and I have seen too many people die from lung cancer–some never smoked a day in their lives but their family members did.  OK, that is my rant for the day.

Thankfully, Ida and I were put with a group far away from the smoking IAs.  And from the minute we took our first step down the staircase into the basement of the Old Town Haunt, all our grievances were forgotten.  The decor was amazing.  Our experience started with a tour guide (who is also the organizer of the event).  We asked him if we could work for him and he said all we had to do was talk to the ticket taker on our way out.  From that moment on, our excitement grew and our adventure began.

We did spend most of our time laughing at the people in our group–even the guys were screaming and freaking out.  I got three hugs from the different characters throughout the maze.  The decor was so authentic.  The costumes were freakishly good and we were even startled a few times.  The area where it was pitch black and we had to feel our way through–then crawl our way through–was pretty awesome.  This was by far the best haunted maze I have ever been through.  Universal and Knott’s have nothing on the Old Town Haunt.  And the best part, starting on Thursday, Ida and I will get the chance to haunt the maze and cue up a little scares of our own.

After the Haunt, our adrenaline was pumping so we decided to try yet another place in Old Town Pasadena.  We headed over to Lucky Baldwins for drinks.  The 21st was the last day of their Oktoberfest specials so I decided I would partake in the festivities with the t-shirt, glass and German beer special.  Finally, good German Oktoberfest beer to redeem the disappointment from the Montrose Oktoberfest.

All and all, it was a great birthday (spent with a great friend).  It’s funny how sometimes everything just seems to fall into place.  Originally I had wanted to go to a play but we opted for the Old Town Haunt instead.  That slight change in plans led to an opportunity I wouldn’t have had if we hadn’t decided to go to the Old Town Haunt and ask if we could volunteer.  Now I have my plans set for Thursday where I will get the chance to do something I have always wanted to do, work in a haunted house.  I can’t wait for Thursday!!