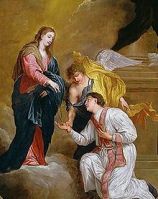 Today is St. Valentine’s Day!  As a journal entry, I made my students find out the real story behind this day, a day that makes all of us who are single feel like shit because we have not been hit with cupid’s arrow.

If you look back at history, there are several Saint Valentines–they were martyrs in ancient Rome.  There is very little known about the Saint Valentine whose feast is on February 14th.  It could commerate one saint or all of the Saint Valentines.  All we do know is that it was removed from the Catholic calendar of saints in 1969 (ironic and dirty).   So if February 14th was originally a day to honor a martyr saint, how did it become a holiday about lovers, cupid, flowers and chocolate?
Some think Valentine’s Day was created by the Catholic church to go against the Pagan festival of Lupercalia, a festival observed from February 13th through the 15th designed to ward off evil spirits and purify the city, releasing health and fertility.  But some scholars are saying that the Catholic church would never do such a thing.  Really?  What about Easter, celebrating the pagan beliefs as well as the Spring Equinox?  But I guess that is just my beef with the Catholic religion, religion forced upon me at a young age.

OK, so then the question still remains, how did Valentine’s Day become a day linked to Romantic love?  The answer: Geoffrey Chaucer.

The current legends that we believe about Saint Valentine came about during the early 14th century, invented by Chaucer and his circle.  The traditions of Valentine’s Day that Chaucer documented in his “Parliament of Foules,” traditions set in the fictional context of old traditions, didn’t exisit before Chaucer, according to historian Jack Oruch.  All we know is that Saint Valentine oversaw the building of his temple in Terni, there is no indication that he was ever a patron saint for lovers.

So basically, the romantic traditions of Valentine’s Day were created by an English author/poet/diplomat.  I have personally seen a copy of the Canterbury Tales (Huntington Library in Pasadena) and just looking at it could make me fall in love, it is a beautiful book.  And one could only hope that his heirs also have stock in Hallmark–hey maybe they even created Hallmark, FTD Flowers, See’s Candies, etc.

So for all of you lovers out there, Geoffrey Chaucer is your real “saint” and for those of us who are singletons, he is our mortal enemy who has found yet another way to make us feel bad–cause all those engagement parties, wedding showers, weddings, and jared commercials weren’t enough.

For single people everywhere, our real Valentine’s hero is Al Capone!  And I can’t speak for all singletons but on February 14th, I love watching the 1967 film “St. Valentine’s Day Massacre” while eating chocolates and ordering pizza.  This is a tradition that truly warms my heart every year. 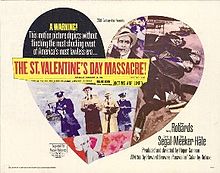